As It Is have released a brand new music video for one of their best tracks off their new records, Okay.

Patty Walters said: I love his interpretation of the song – re-imagining mine and Rachel’s story with an empowering, inspirational feel with a happy ending in hindsight. It’s such a beautiful and powerful music video, and I’m ecstatic to finally be sharing it.”

Check out the amazing video below:

Basement have signed with Fueled By Ramen records. They’re a major label which boasts artists such as Paramore, Twenty One Pilots and more.

While this will be their international records label, Warner Bros. records will still be in charge of their UK affairs.

This is what the band had to say on Facebook:

“There’s been a lot going on behind the scenes with Basement as of late and we’re excited to finally share some of that with you all. In December, we took a chance and signed a new record deal with the people at Fueled By Ramen.

“We can’t pretend that this was an easy decision to make because up until this point, we owe so much of everything that’s happened to Run For Cover. That being said, time is short and even more so in the world of music and when you’re presented with an incredible opportunity such as this, you have to give it a shot. Thank you to RFC for always supporting us and a MASSIVE thank you to FBR for taking a chance on us. We are very excited for the future.”

Basement will be re-releasing their album Promise Everything 03 March. The title track can be heard below:

Here’s the tour poster for their Feb/March UK tour:

Blood Youth have announced details of their new album

‘Beyond Repair’ will be released 7th April via Rude Records and below is a video for their new single ‘Reason To Stay’.

And the tracklisting is as follows:

They are also playing a few shows to celebrate the release of the album:

US Rockers All Time Low have had their say on Donald Trump.

Here’s the interview with Billboard.

“All four of us were in different places, texting back and forth going, ‘Man, how unreal is this? This is scary and crazy‘” said vocalist Alex Gaskarth.

“A lot of us did a lot of reading and brushing up, which is important to do at times like this. I think it’s really important when these certain situations come up in life and in the world, it’s good to try to educate yourself to know exactly what’s going on.”

“All four of us felt like in general it’s wrong. It’s wrong to make sweeping judgments on large groups of people. It’s just wrong, in this case, it’s blatantly racist and xenophobic.”

This is an issue close to the band’s hearts with Jack Barakat’s parents living in the Middle East.

They recently released a new t-shirt with all the proceeds from the sales going to the ACLU.

You can order it here.

The One Hundred have released a new song from their upcoming album, ‘Dark Matters’ can be heard below.

Also, the band have announced the dates for an upcoming UK tour, here they are:

Bury Tomorrow have announced two more supporting bands alongside themselves and Crossfaith for the new tour.

Black Peaks and Any Given Day will be opening for the bands.

Here’s the tour poster for April:

The Menzinger’s are streaming their great new album, After The Party.

They released their new album last Friday and you can hear it in full below:

They will also be returning for a UK tour in a few months time.

Here are the bands’ tour dates:

Evarose has just released their new music video, Telephonic, lifted from their debut album Invisible Monsters. This was released ahead of their UK tour in a month’s time.

Check out the video:

It’s been one of the worst-kept secrets for the last week or two, but Muse have finally announced their upcoming huge US tour with 30 Seconds to Mars and rising rockers Pvris.

I’m just going to pretend to not jealous at this point because these are bands that I admire. But it’s yet another US tour that will never come to the UK. 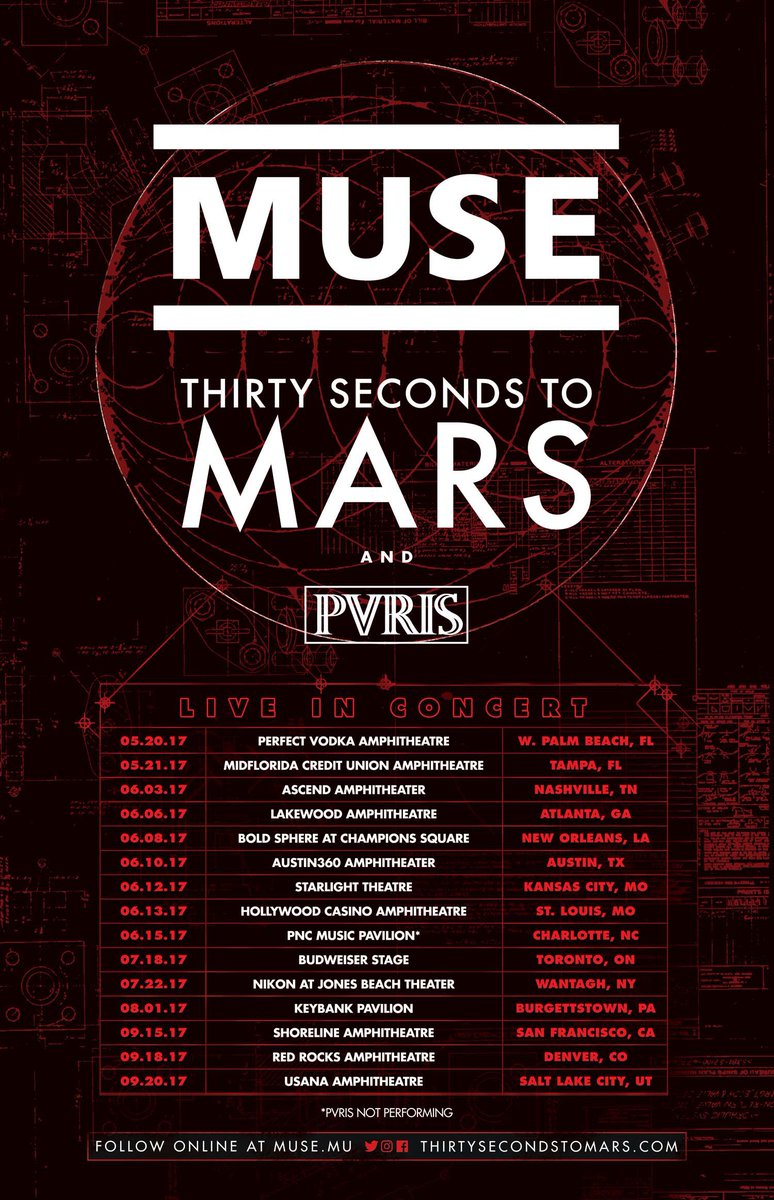